Elbow is a fitting that changes the direction of a pipe run. According to the angle, there are three most commonly used elbows: 45 ° and 90 ° 180 °, and other abnormal angle elbows such as 60 ° are also included according to the needs of the project.(Welding method of large-size elbow)

First, cut the shape on the plate and push the material hot. The pushing machine is an ox horn shaped core head or core rod. The core rod changes from thin to thick. The pushing process of elbow is a process of expanding belt bending. There is support at the back to thread the blanking pipe section into the core rod. There is a archway at the back to fix the core rod. There is a trolley in the middle. Some of the trolley is driven by hydraulic transmission, and some are driven by mechanical transmission, that is, lead screw transmission, Then push the trolley forward. The trolley pushes the pipe forward along the mandrel. There is an induction ring outside the mandrel to heat the pipe. Then the trolley pushes the pipe down and processes one. 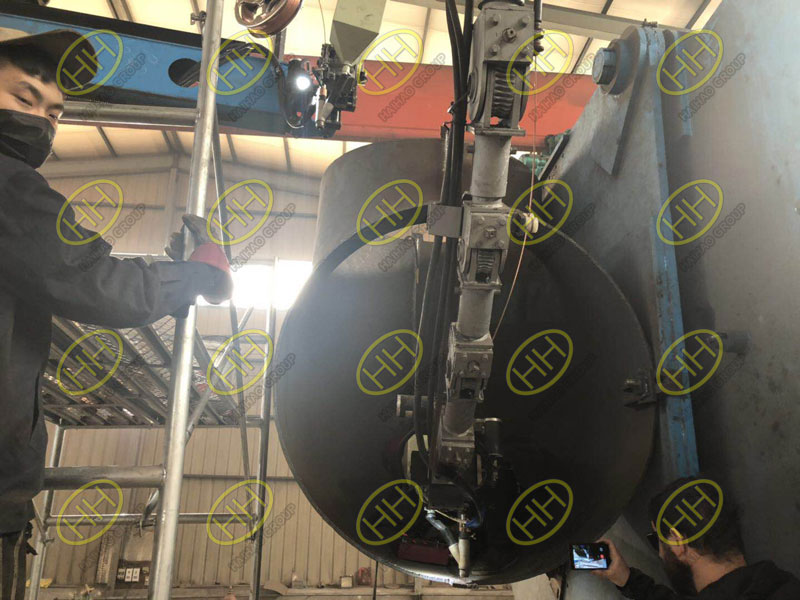 The automatic welding production of large-diameter elbows in Haihao Group

Second, in the finishing process, welding shall be carried out. After shot peening, the iron oxide scale on the inner and outer surfaces of the elbow shall be removed, and the two ends shall be beveled for welding.

Third, first select the specification and put forward the pipe material. For example, the length of 90 degree elbow can be calculated through its curvature, and the 90 ° elbow can be processed, and then cut off with this length as the fixed length. 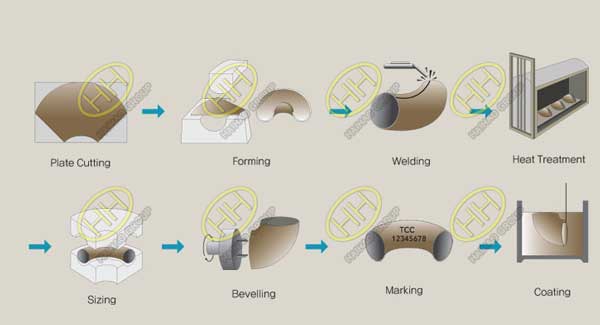 Fourth, after pushing, the elbow should be shaped in this hot state, because some elbows will be distorted after improper treatment, which is not allowed. In addition, after pushing the head, the outer diameter of the front end is generally large, which should be shaped by the shaping die. The shaping die is actually a press. There should be a set of dies, two semi-circular arcs, one up and one down. The outer diameter after shaping reaches the size of the finished product.

Fifth, the elbow needs to be typed and painted.

Haihao Group manufacture big size elbow products for about 40 years,the products sells well all over the world for the high quality.If you have any question,please contact us!

large size elbow
Share:
PREV： Welding method of large-size elbow
NEXT： What we should know about epoxy coating?